Posted on November 19, 2012 by Teddy Mitrosilis

LOS ANGELES – They all came for the first of two great reveals. Magic, West, Worthy, Riley, Green, Cooper, Nixon, Rambis, they all came in praise and celebration of their captain, the anchor of their collective legacy.

After a few years of bickering and divide, of wounded egos and charred feelings, Kareem Abdul-Jabbar got his moment, his chance to be forever remembered in tangible form around this Lakers franchise. 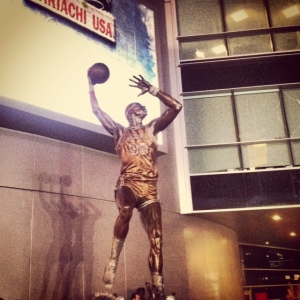 In Star Plaza in front of Staples Center last Friday, the Lakers unveiled Abdul-Jabbar’s statue, 16 feet of meticulously sculpted bronze standing in remembrance of the NBA’s all-time leading scorer and the golden era of this franchise. An era that is more than 20 years removed from this town but kept alive through stories told with equal parts fervor and wistfulness.

Pat Riley told stories of coaching Kareem and called him the most “selfless” player he’s been around. Magic Johnson told Kareem that he “really should have had the first statue because you built the Staples Center,” sanding down any rough edges that may have remained between Abdul-Jabbar and the Buss family after Magic, Jerry West, Chick Hearn, Wayne Gretzky and Oscar De La Hoya had all been commemorated with bronze archetypes before the great center received his.

And Kareem, a man who can toggle between effervescent and brooding, seemed happy. He tried to apologize in subtle terms for his piercing words of the franchise in recent years, and he conveyed genuine peace. How could he not?

That 16-foot Kareem, molded in the middle of his iconic “Skyhook” shot, is beautiful and regal. It glistens beneath the L.A. sun and glows in the shadow of Staples Center video board at night.

Sunday, I came to Staples Center anticipating the second of the two great reveals.

Mike D’Antoni, who was hired as head coach of the Lakers after their 1-4 start proved enough to cost Mike Brown his job, was supposed to make his debut against the Houston Rockets. He flew in the previous week from New York, hobbling after knee replacement surgery a couple of weeks prior, and was introduced last Thursday. He ran a practice and established an attitude for the Lakers.

Of course, D’Antoni adores points. “Who doesn’t?” you may ask, and you’d have a point. But few offenses churn through possessions like D’Antoni offenses, and that’s precisely what he was hired here to do. “We would love to be able to play ‘Showtime’-type basketball,” D’Antoni said at his introductory press conference.

Sunday, it turned out, was a little too ambitious for D’Antoni to return. He was worried about his energy level, whether he could maintain it through the course of an entire game on that healing knee of his, and so he watched again from the training room underneath Staples Center, as Bernie Bickerstaff coached his fifth game as the Lakers’ acting head coach.

But even without D’Antoni on the bench, his presence lingered. The Lakers won the tip, and Dwight Howard knocked down a little three-foot hook. They pushed the ball up the court, running hard off of Houston’s misses. It was clear immediately what D’Antoni was stressing: pace.

In the first quarter, Kobe Bryant grabbed a rebound, and seven seconds later Pau Gasol drained a 22-footer. Gasol grabbed a rebound off a James Harden miss, and 12 seconds later Metta World Peace sank a 13-foot jumper. World Peace rebounded a Chandler Parson’s miss and chugged down the court in six seconds to lay it in. Darius Morris picked off a pass and blitzed the length of the hardwood in four seconds for two more. Omer Asik scored on a driving layup, and 12 seconds later Bryant was knocking down a 12-foot J. In seven seconds, Bryant grabbed a defensive board, took it up court and kicked it to Chris Duhon for a 3-pointer. Bryant scored a layup of his own in four seconds, and in another four-second period, took a board and shot it up-court to Gasol, who laid it in.

It was mostly a flurry, the first 12 minutes against Houston, as the Lakers scored 40 points and built an 11-point lead, finishing the evening with a 119-108 victory. You could see tangible pieces of D’Antoni’s offense in place, with Bryant playing off high pick-and-rolls from Howard, but it was the newfound fluidity and freedom with which the Lakers played that was striking.

It was as if D’Antoni told the Lakers scoring is an attitude, and suddenly some electrical current sparked and there was life again in this collection of talent that sputtered and stuck in the web of Ivy League offense under Brown. 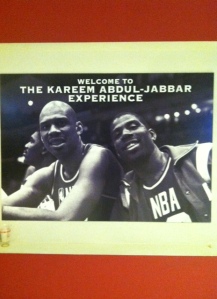 There was great life in Staples Center, too. Across the street at L.A. Live, overexposed women in cocktail dresses clung to the arms of men fighting their years with denial, both perusing the perimeter of the American Music Awards’ red carpet. At Staples, fans cycled through “The Kareem Abdul-Jabbar Experience,” a shrine to the big man filled with pieces of memorabilia, and they danced to hip-hop and sang to Randy Newman’s L.A. ballad.

The Lakers flowed onto the court in their Sunday whites, and Staples roared with them. It felt like those great Friday nights when evening plans begin at Staples Center before stretching west to the various establishments of Hollywood grandeur. The crowd booed James Harden each time he touched the ball, and they anticipated Bryant buckets and Howard lobs.

It struck me toward the end of the first quarter, after watching 12 minutes of Morris sprinting the ball ahead and Bryant twirling his right hand at Gasol and Howard when they lumbered behind, as if to say, Let’s go, run, faster. With two seconds left, Harden threw an errant pass out of bounds. As most of the players dropped their heads, willing to toss away the final ticks of the quarter, Gasol headed down court and World Peace threw a bullet of an in-bounds pass the length of the court, dropping it over Gasol’s shoulder in time for him to lay it up before the buzzer.

This team just can’t wait to score, I thought. It was only the fifth quarter since D’Antoni had officially been introduced as the leader of this franchise, and the fans seemed to embracing the change.

They were beginning to embrace the man who was the first choice of nobody.

It all seemed to be aligning perfectly when the Lakers fired Brown.

There was Bryant, in the waning years of his Lakers career and staring through his quickly closing championship window. There was Howard, the interior force the Lakers have had in each of their five NBA championships they’ve won with Bryant. And there was Phil Jackson, the coach of the Lakers’ title teams in ’00, ’01, ’02, ’09 and ’10, unemployed and seemingly rested, presumably ready for one last championship run and a few more big paychecks.

Everybody wanted Jackson. Kobe endorsed him, Magic gushed about him, the fans clamored for him. It seemed like an easy fit, a simple solution that carried the most sense and hope. Of course, it didn’t work out that way. Jackson tested the boundaries of his influence, the reach of his Hall of Fame accomplishments, the depth of his power in an organization that hadn’t won anything between the Showtime Lakers and Jackson’s Lakers.

And when it was all over, when vice president Jim Buss had chosen D’Antoni instead of bending to Jackson’s demands, there wasn’t instant jubilation around the Lakers. Magic went on television and said, “I don’t feel Mike D’Antoni is the right coach for the Lakers.” Magic said he also didn’t “trust” Jim Buss the way he trusted his father Jerry, piercing words from the man who is still very much the face of the franchise even if he is no longer financially invested in the club.

For two nights before Brown was fired, Lakers fans filled Staples Center and chanted Phil’s name. In some circles, their tone around D’Antoni’s hiring was, D’Antoni? The guy whose teams don’t play defense? Or the guy whose ass we’ve kicked for the better part of a decade?

That wasn’t completely lost on Lakers fans, I don’t think, but it was buried beneath desperate pleas for a magnificent time that has since passed on by.

As hoards of fans hung around Kareem’s statue to pose for pictures, I wondered if any of them saw the metaphor, thought about the similarities, or if they had already been swept up in the points and the offense and the buzz that returned with three wins in four games since Brown was fired.

The Phil Jackson that the Staples Center crowd chanted for is every bit of that bronze inanimate object that went up last Friday. He’s an ideal, a memory, a beacon of the high times here. Like Kareem, there will likely be a time when they all come back in praise and in celebration of him. It will be Kobe and Shaq and Fisher and Horry and Gasol and Shaw and others standing around some banquet room for their leader, remembering the good work they accomplished.

But that was then. The Phil Jackson the Lakers would have gotten now likely would not have been the same Phil Jackson fans remember and called for. Fans wanted what Jackson used to provide, without realizing that’s very much different than what he may have brought now.

Late in the second half, Dwight Howard snatches a rebound and flips it off to Kobe, and Kobe runs up the court while wheeling his arm like a third base coach, begging his big guy to motor, forcing the Lakers to operate in D’Antoni’s style.

Behind the Lakers’ bench sits Steve Nash, dressed in a suit and still recovering from a fractured bone in his leg. During a timeout, the camera at Staples Center catches Nash dancing Gangnam style, and he plays it up for the crowd.

The future Hall of Fame point guard, the ignition to the offense D’Antoni is putting in place, has hardly played so far this season.

On the worst nights for Mike D’Antoni’s Lakers, they may score more than 100 points and lose, because defense will be a point of discussion as the season moves along.

On the best nights, they will run teams off the court, pushing 130 points and dunking and giving Bryant more time to rest and Nash more time to dance on the bench.

And on some nights, the ones this town hoped Jackson would bring back, the man who was nobody’s first choice may even orchestrate something that resembles the past, bringing the best of those bronze figures inside for a little run.